This week #Rishi Sunak has been in the news because it turns out the whole time he’s been living in number 11, him and his wife haven’t been proper UK residents. He’s got a #greencard, she’s a #nondom. What does that all mean?

Adam does a #tarot reading to find out.

Rishi was here at number 11, interfering with the country. His commitment was limited, he was here to punish the UK with wrong-headed self-sabotage like austerity and privatisation.

They always knew they had the satiety of a hidden backup. They had residence in another country where they could retire when their evil work was done. Their marital prosperity was assured because they have hazard protection: Another life waiting abroad.

Meanwhile they forced those outside their marriage to suffer prudence. They mortgaged the country, the teachers, the needs of the people. Health was sacrificed, hoarding encouraged, hospitals forced to sacrifice and get into debt.

They created an abundance of money to spend by the billions, giving away to their mates tens of billions of pounds in return for shoddy PPE and crappy spying apps and literally no trace or track at all.

They created abundance for themselves and their friends by draining the state of all it’s wealth and funnelling it all into private hands.

It’s triples all around for Sunak’s family and his private company’s offshore partners.

Of course this plan to topple the country and steal all it’s wealth away with him to America has been discovered. And something is going to collapse. It will be fatal, it will cause bankruptcy and damage.

Could it be redundancy for Sunnak? Or even an end to the monarchy, the kingdom itself?

The Sunacks set themselves up to interfere with the country, while their hidden motive was their safety abroad. They forced prudence on the people, while draining the country’s wealth towards their corporate partners and friends.

It will all lead to collapse.

But /what/ will collapse? Sunak’s plan? Or the country?

He may or may not get away it it, the cards remain silent on that issue.

I suppose that’s up to the people of Britain and it’s institutions. 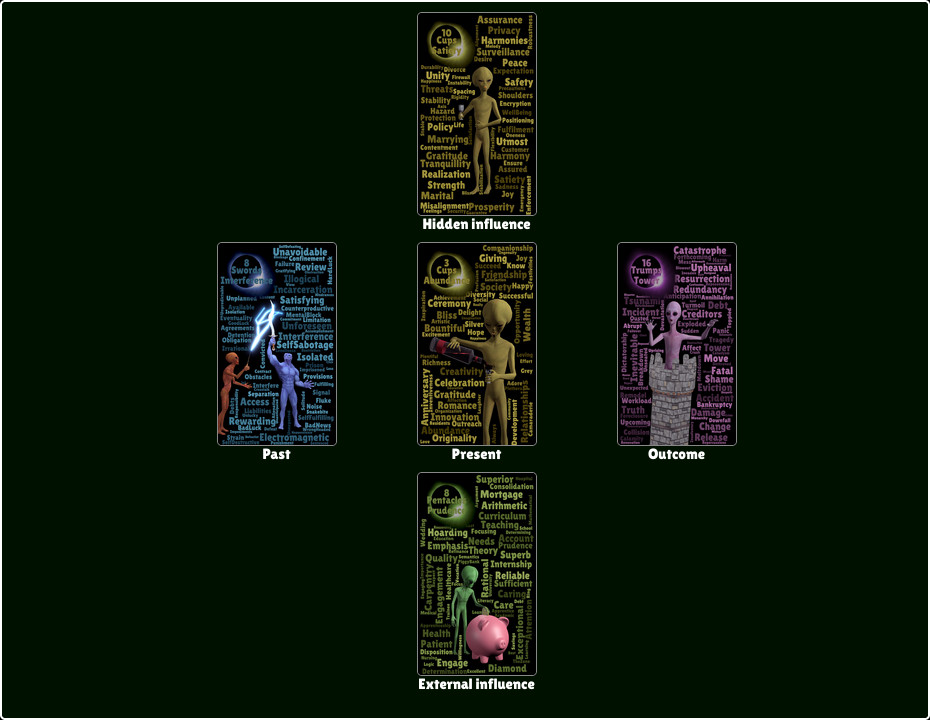