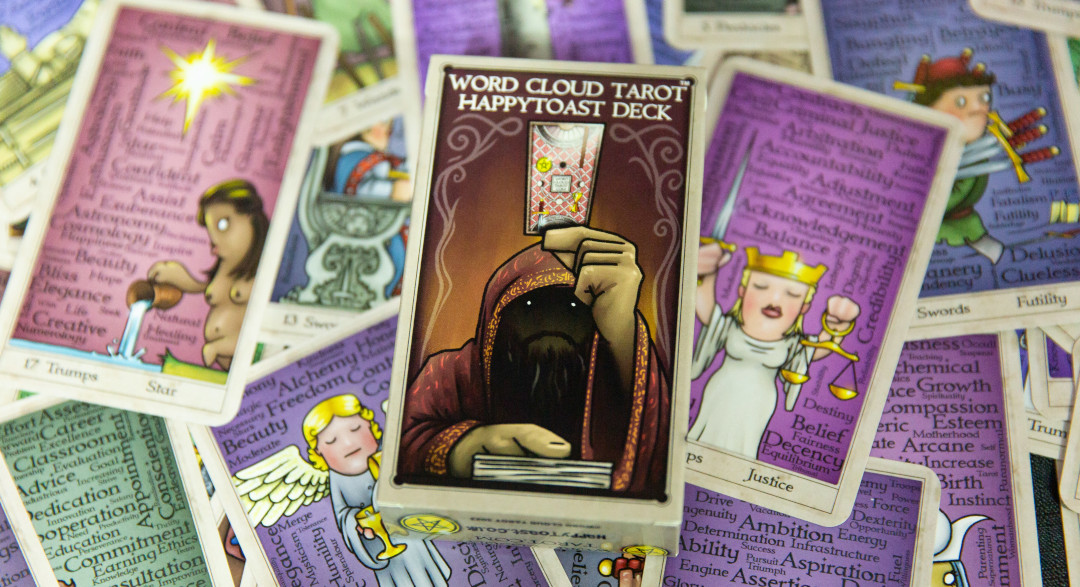 Frustrated with similar repetitive memorisation work, I decided upon a simple solution: Write the meanings of the cards directly onto the cards.

I began a many-year-long project to develop and refine a word list to be attached to the cards themselves.

The tarot cards are each a recognisable archetype, a pattern in the reality of human thought. I located the closest words to describing these archetypes through an exhaustive algorithmic search of word-space and then edited those lists down to the perfect size and number to locate that archetype in thing-space.

The cards still needed more though. They needed the skills of an advanced memetic engineer. With the right memes on the cards, anyone using them will effortlessly learn all the meanings as they are written on the cards.

Happy Toast has been scribbling on the internet basically all century long. His classic funny images and animations have been ripped off and forwarded without attribution all over the world for almost as long as the web has existed.

So I contacted Happy Toast, and convinced him to create and assemble an array of cute and fun renderings of the classic Rider-Waite deck, reimagined in his inimitable cartoon style while leaving enough space to add the word-cloud reminders of the card’s meaning and associated archetypes.

The result is a deck that’s beautiful and easy for even a novice to use, yet engaging and unforgettable to help train your brain if you still struggle to remember what the six of cups means.

When you deal the cards out into a spread, the archetypes and word-clouds naturally flow into a satisfying and often illuminating narrative.

Sometimes you don’t know how much you know.

Even a novice or new-comer with no previous experience reading the tarot can immediately begin to analyse spreads, and perform readings to explore the nature of the tarot with barely any guidance or training.

The deck will be generally available next year, but first there will be a chance to support the project through a crowdfunding campaign during November 2022.

There will be decks available for pre-order, limited edition sets for more generous supporters, posters and custom offers and much much more.

We hope that the new deck produced in partnership with Happy Toast will give people a chance to give back to the artist who has given the internet so much.

Some may argue with the selection of words chosen, some may object to cartoon nudity, but we think everyone will agree this is an interesting and beautiful deck that could help spread knowledge of the occult and the tarot.

Just the thumb-nails for now, but come back in X days to see the full set and and pledge your support!